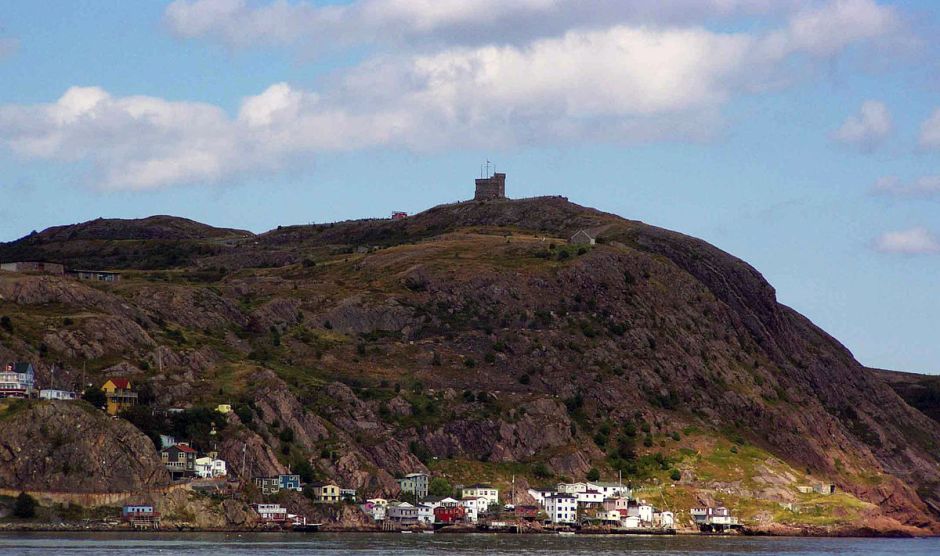 This is Part Two of the Calmer Girls series setting in pictures.

Calmer Secrets takes place in Newfoundland in 1997-98, four years later than the first book. (The Calmer Girls Book One setting pictorial can be seen here.)

First, let’s take a look at Samantha’s school in Corner Brook, Memorial University’s Grenfell Campus on the west coast of the province. Samantha is enrolled in the Visual Arts program there.

When Samantha returns to St. John’s during a school break, she goes downtown with Veronica and her friends. In one of the George Street clubs, she sees cover band, Cold Plate, and is reunited with her high school friend Kalen there.

Later in the story, tragedy strikes.
The youngest character in the book is brought to the Janeway Children’s Hospital,
the one that existed at that time.
A new facility was built a couple of years later. 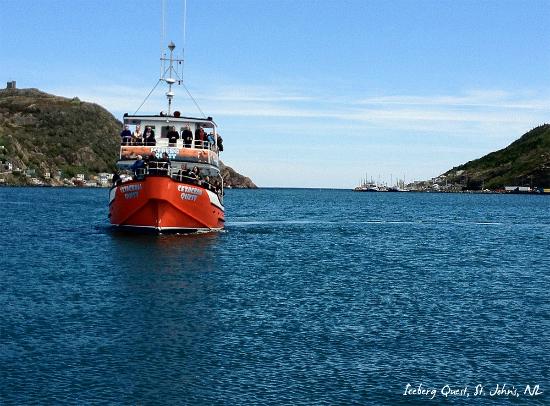 Thanks for coming along!

Iceberg Alley is what we call the area stretching from the coast of Labrador to the northeast coast of the island of Newfoundland, and the best time for viewing bergs is late May and early June.

Saturday was beautiful and sunny, so Paul and I decided to drive to Greenspond to see if there were any icebergs close enough for good snaps. Before we entered the town, we were delighted to meet a few of them next to Greenspond’s causeway. 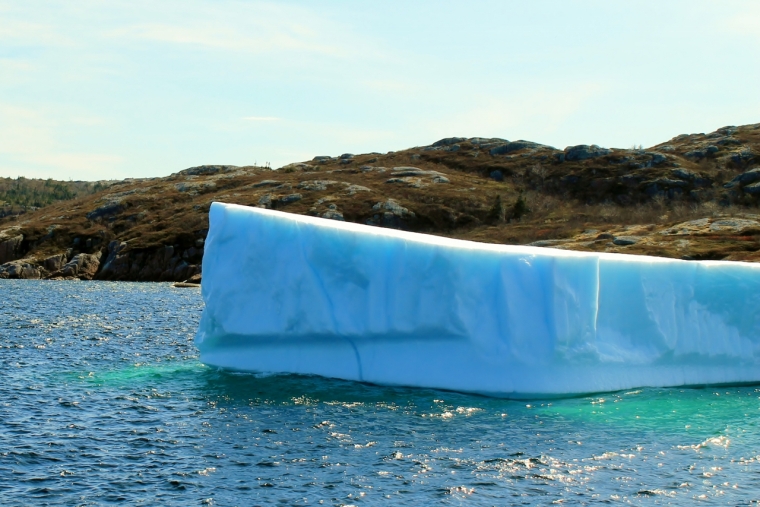 We drove on into Greenspond to discover even more of the frozen beauties from the North. 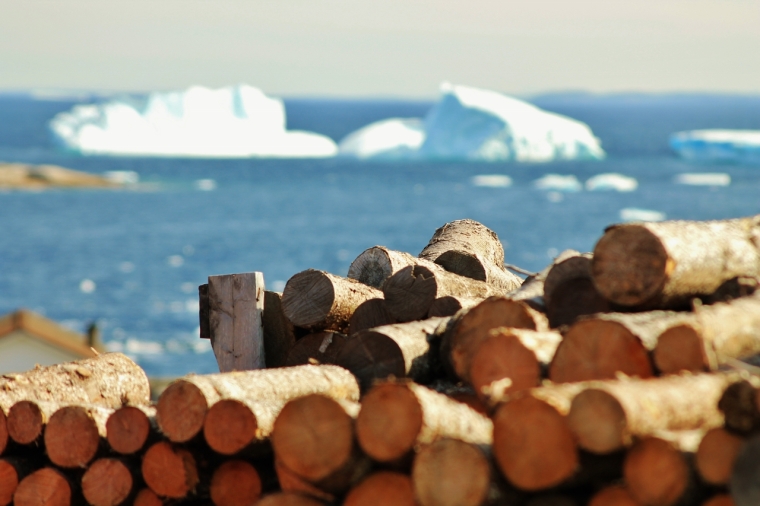 Have you ever gotten up close and personal with an iceberg?

Once again, iceberg season has arrived in Newfoundland.

Icebergs are beautiful to photograph and are a huge Force of Nature ( we only have to think of the Titanic disaster ) but the pack ice that often accompanies them can wreak their own special havoc. In our part of the world, these masses of moving ice interfere with fishing and sometimes even trap whales and dolphins.

In the area of Bonavista Bay North where I live, the water is too shallow to allow the big icebergs to get very close, but we do see plenty of pack ice and bergy bits.

Enter the seagulls. These hardy scavenger birds are so well-adapted to this rugged environment, I am in awe. Their ability to not only survive, but to thrive here, may well be called another force of nature. 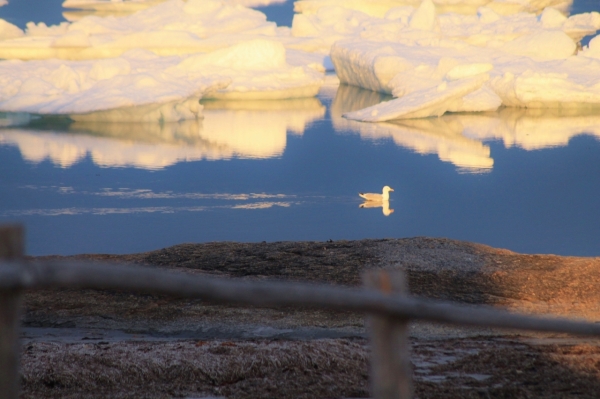 Like all of our feathered friends in the northern hemisphere, seagulls mate in spring. This is the time of year in Newfoundland we see them answer to their instinct and pair off to procreate. They are monogamous, usually with one mate for life. 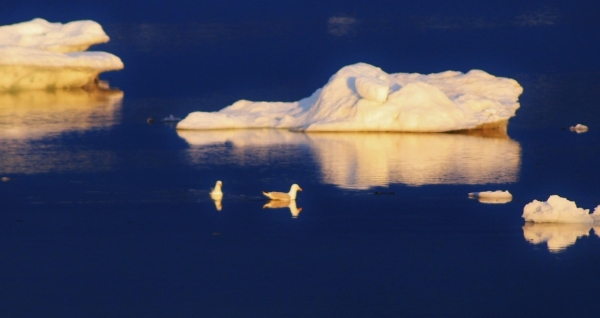 On the evening I took these photos, the setting sun cast interesting shadows and hues upon the ice and the water.

Of course, speaking of a force of nature, our Vivian needed to be a part of it all. 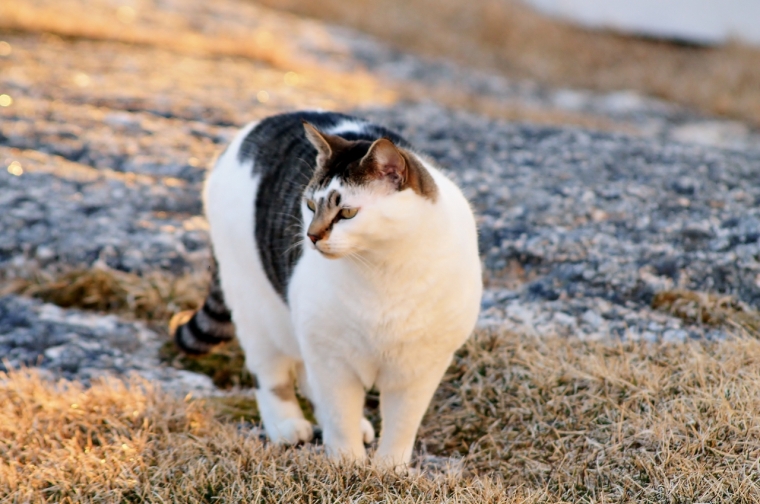 What Forces of Nature do you have in your backyard?

After completing the hiking trail on Saturday, my husband and I took a drive through scenic Greenspond.

It is an especially nice time to visit because of the pleasant weather. The little outport town sparkles like a jewel in the afternoon sun, the plaintive cries of seagulls the only sounds that break the silence.

The breeze has abated entirely, leaving the surface of the harbour basin as smooth as a mirror. 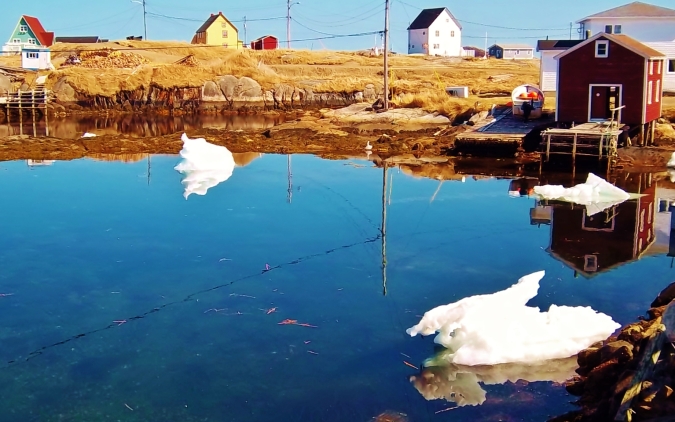 The peacefulness of the setting is magical, meditative, hypnotizing.

I am drawn to its perfect calm…

…and I drink in its beauty as I quietly reflect.

…and make room for inspiration.

We stop to admire this gem of a property. Everything about it is impeccable, from the patchwork quilt on the clothesline…

…to the softly scalloped valances in each window.
To me, it is a work of art.

Have you ever visited a place that seemed the perfect setting for a story?
Where do you go to think and dream?

Saturday was such a gorgeous day in our corner of the world, one had to get out and enjoy it. We decided to drive to Greenspond, a community comprised of several islands not far from where we live. Connected to the mainland of Newfoundland by a causeway, Greenspond boasts a wonderful walking trail around most of the perimeter of its largest island. It was perfect weather with light winds, so I took my camera. 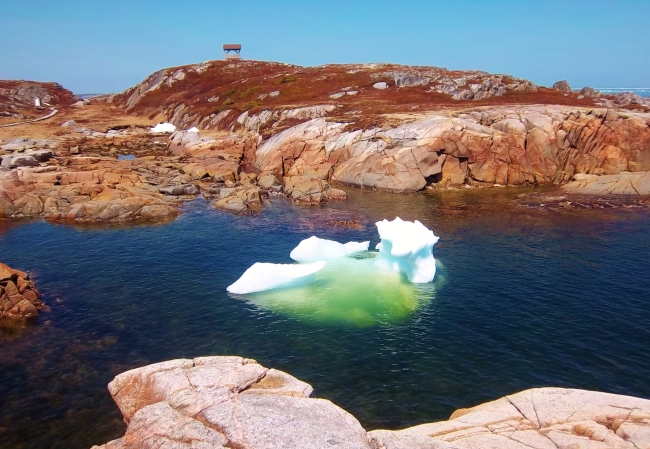 Once we got on the trail, it didn’t take long for us to discover our first “bergy bit” floating like an ice sculpture in a peaceful cove. 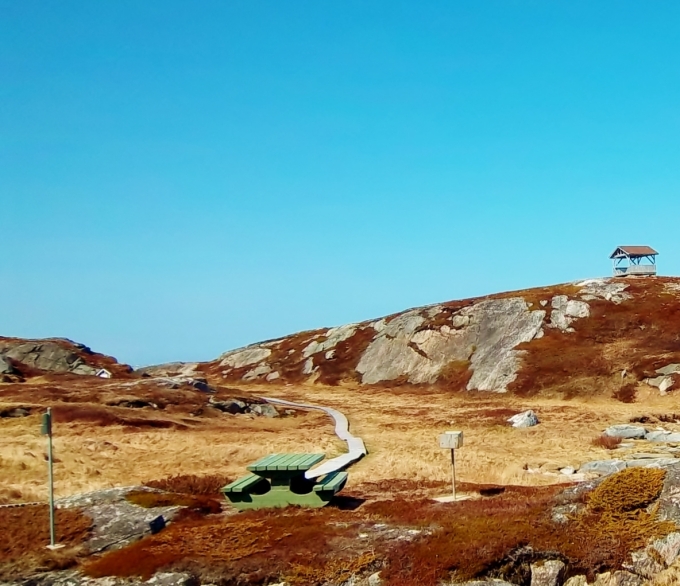 The views of the coastline and of the Atlantic are spectacular. 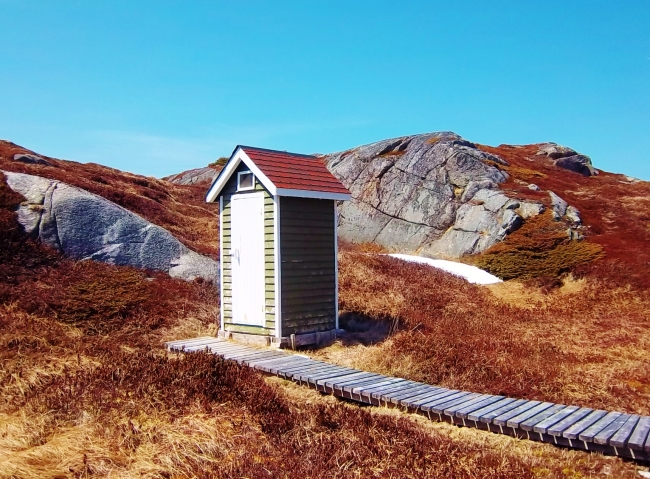 It seems the locals thought of everything. 😉 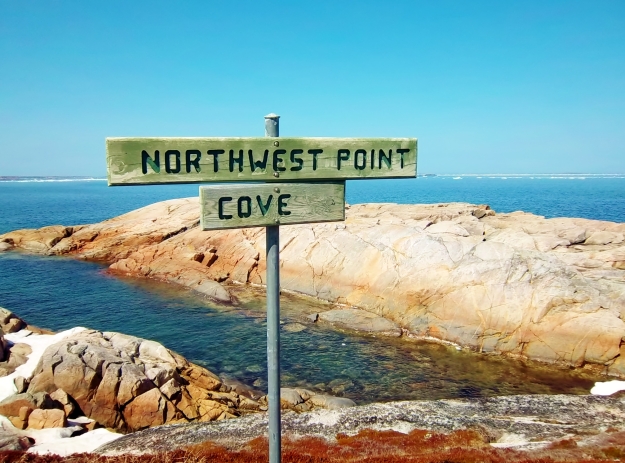 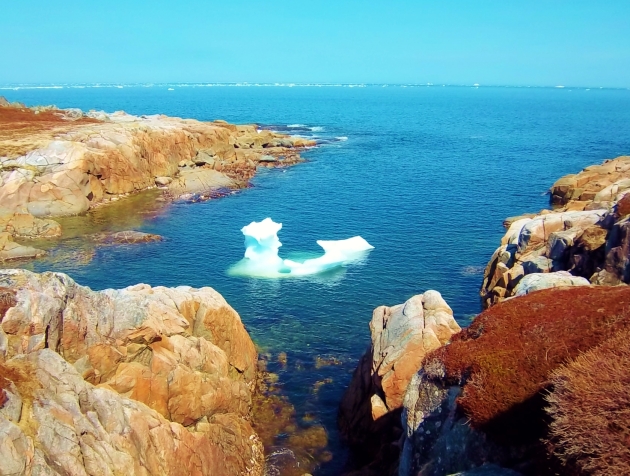 There seems to be a little berg in every bay. 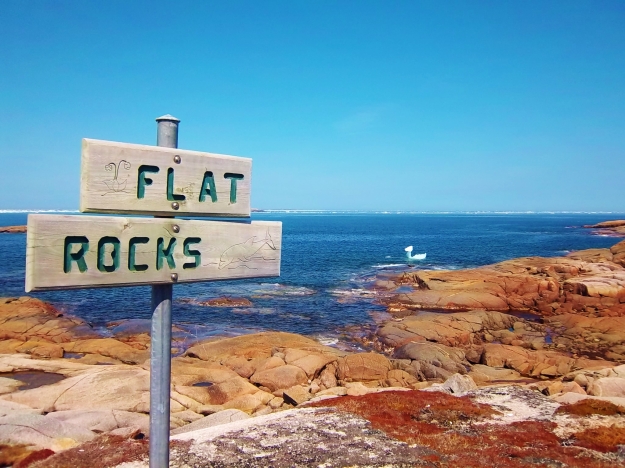 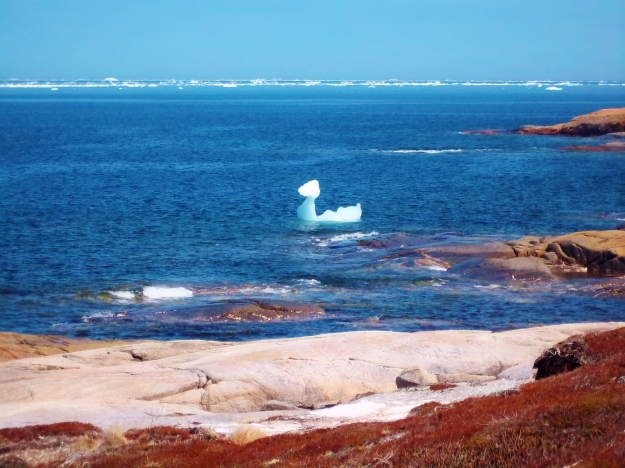 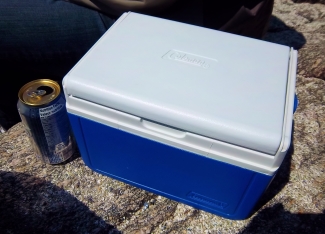 The Greenspond Walking Trail is a collaboration between Man and Nature, resulting in what I consider a living work of art.
Come back and join me in a couple of days for Part Two of my Greenspond photo shoot. 🙂

To my Fellow Canadians: What did you do outdoors on this long Victoria Day weekend?

Iceberg Viewing in Newfoundland and Labrador