Last week, while looking back on a few of my January posts from the past, I hit upon the following that I’d written exactly eight years ago. I thought the timing was perfect to provide an update as the last line suggested. I had mentioned that “The Change” can take anywhere from two to eight years. Thankfully, it didn’t last anywhere near eight years for me, and yes, Paul survived. 🙂

By the way, he still plays floor hockey on Monday nights and I never turn the heat off anymore in the dead of winter. I hope that brings a measure of comfort to those of you who are dealing with menopause or perimenopause at the moment.

January 30, 2012:
So here I am, on a frigid January evening. Outside, a bitter wind chill of minus 10 degrees Celsius (that’s 14+ degrees for you Fahrenheit folks) is blowing directly off the North Atlantic  just a few yards from our door. Husband Paul is gone playing floor hockey at the high school gym, so I’m alone, trying desperately to chill out. Not figuratively, mind you, but literally. I turned down the thermostats so there is no heat on in my house, simply because my body feels like a furnace turned up on cremate.

This is a new and fresh hell for yours truly, only making itself known within the last couple of weeks. Somehow, I had let myself believe I’d be lucky enough to escape the discomfort of “tropical moments” at this time of my life. How I used to chuckle when one of my friends or coworkers complained of a hot flash. Ha! The joke is now on me. And for the uninitiated, it doesn’t feel like a source of external heat that hits you. It’s more like internal spontaneous combustion, where you think you just might suddenly burst into flames. 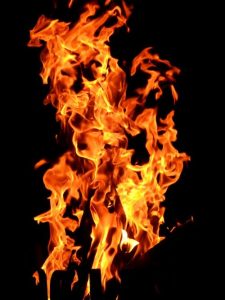 Stripped down to a tank top and appropriately, sweat pants, eating blueberries out of the freezer (still frozen), I’m trying to hold it together. I made the mistake earlier of googling other menopause symptoms, and started ticking off other lovely ailments I’ve been experiencing. Brain fog? Check. Anxiety? Check. Night sweats? Check. Mood swings? Okay, that one is just me, can’t blame that on The Change.

The website also warned that the whole process could take anywhere from two to eight years before it is done. That’s just terrific. Think I’ll go out and stick my head in a snow bank.

And now Paul is home. “It’s freezing here!” he says. He looks at my red face. “Is it alright if I turn up the heat?”

“If you must,” I bark, fanning myself with a throw cushion.

Then I realize something. In our house, PMS always stood for Paul Must Suffer. Well, the PMS might be coming to an end for me, but it won’t be ending for him any time soon. Will he survive? Will I?

Check back in two to eight years.